Predefined rotations maintain their own history - for example being assigned to a task via the Peer Reviewers rotation won't affect your position in the Support Staff rotation. A rotation has its own configurable options which are used by default unless overridden.

When you use a rotation to create a pick, the rotation's configured included/excluded users and options will be used.

Select a rotation from the Rotation dropdown. This dropdown is only visible when your team has at least one rotation. You can specify additional users, groups, and channels on a per-pick basis. They will be applied on top of the rotation's roster. 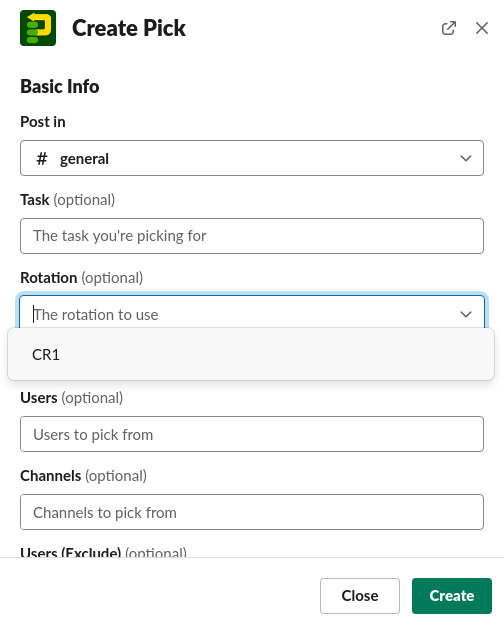 With the slash command

Manage rotations in the Rotations section of Pickle's app home. Changes you make here will affect rotations for your entire team.

The users, groups, and channels which are part of a rotation are called a roster. By default a static roster is used, which works the same way as specifying users in a plain pick. The daily roster picks from a different set of users for each day of the week. You'll probably want to use this for creating things like on-call rotations. 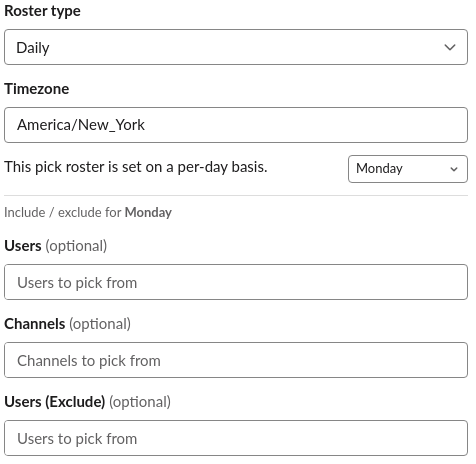 Note - The daily roster asks you to specify a timezone as a text string at this time due to a limitation with Slack's dropdowns. Any tz database timezone will do.

/pickle rotations brings will show who's next for all of your team's rotations, where applicable. 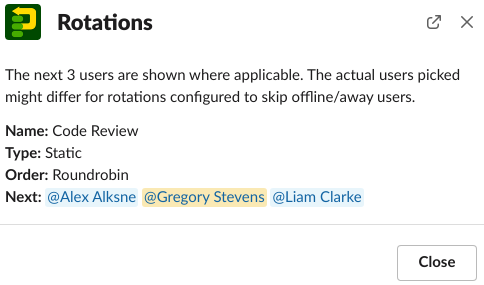 Use Pickle's workflow step to schedule rotations. The Scheduled date & time trigger lets you specify when, and the Pick someone lets you specify the rotation. Check out this example for scheduling Pickle to choose a meeting host.